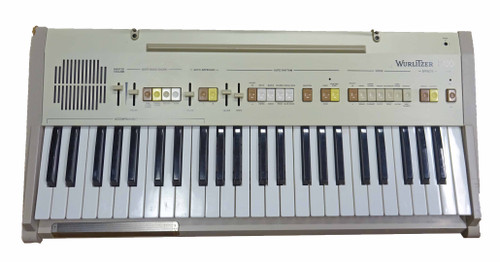 This vintage keyboard is in very good condition. All of the buttons and sliders work well along with the touch strip and every keys works properly. Cosmetically it looks great for a keyboard of its age with just a few scuffs and scratches here and there and a small chip out of the back corner of the left wooden end cap.

Full range of 8-note polyphonic voices and a selection of accompaniment features. While these latter are intended to aid the learner and home entertainer, it should be possible to use this keyboard for more diverse purposes as well.

The overall appearance of the machine is good, the finish being in off white wood and plastic; there's a fitting for a music rest and for a stand. The keyboard is 4 octaves C-C, with a bank of square tabs in brown, white, grey and yellow above it on the sloping top panel. At the left a built-in speaker is provided, rated at 5W.

There are 12 instrumental voices, selected by six white push buttons towards the right hand end of the control panel, together with a single brown bank selector. The Vibraphone is particularly realistic, with a slow built-in tremolo, and the Wah Trumpet has a fast 'filter opening' effect with a high degree of resonance. Strings has a fixed delayed vibrato, and there's a good selection of other sounds including Piano, Harpsichord and Accordion. To the left of the voice push buttons and next to the power button are two buttons for Vibrato and for Sustain, both useful effects which give a reasonable degree of variation to the existing sounds.

At the centre of the control panel is the rhythm section, the first of the three auto features of which the other two are arpeggio and bass/chord. Four white buttons and another brown bank selector give a total choice of eight percussion patterns, including Disco, Rock, Rhumba and SlowRock; the percussion sounds are adequate, typical of a small home organ perhaps, and there's a Variation available on each pattern. On the Waltz, for instance, use of the Variation doubles up each snare drum beat while leaving the bass drum unaltered. On March the snare drum becomes quadrupled, while on Disco the variation is a quick snare drum offbeat on each bar.

The rhythms have a volume slider, and a tempo control which also regulates the other auto features. All the sliders work from bottom to top and have large white tablet caps, the length of travel being sufficient to allow fine adjustments to be made quite easily.

Between the rhythm section and the polyphonic voice section are two more tablet switches, marked start/stop and synchro start, which link together the percussion and the other auto functions. Above these two buttons is a red LED which indicates the state of the accompaniment section and of the synchro start option.

On the left of the control panel are the auto bass/chord and arpeggio sections. The arpeggio has three controls, a sliding volume control and two tablets to select arpeggio I or II (II having priority if both are pressed). For tempo and start/stop the arpeggio depends on the rhythm section. Arpeggio I plays the 3rd, 5th and Root of the chord selected on the accompaniment section (the lower 1½ octaves of the keyboard) in an ascending mode, while arpeggio II plays in an ascending/descending mode: in each case the arpeggio covers the whole range of the accompaniment section and is in a high-pitched piano-like voicing.

The final section, autobass/chord, is a little unusual, since in addition to the main panel controls there is a touch sensitive strip wrapped around the front of the casing below the keyboard which determines the exact chord played. Synchro Start causes the rhythm unit to start when a chord is first played on the accompaniment section, and this chord can be either played normally (using the Finger Chord button) or with one finger (using the Single Finger Chord button). In the latter case the key alone produces a major chord, while the top part of the touch sensitive strip alters this to a seventh, the middle part to diminished seventh and the bottom part to minor. This chord voicing is also applied to the arpeggio, and it's possible to lock the chord on using the Memory button.

The chords play in a low piano-like voicing with a different pattern for each rhythm, and it is also possible to add a Bass pattern which plays Root/5th/3rd/Octave and variations thereof depending on the individual rhythm pattern.

Internally the Wurlitzer is well laid out, with PCBs and circuitry of very high quality and a power transformer rated to cope more than adequately; the built-in speaker doesn't have its own enclosure however. The major control functions are carried out by two large ICs, the Columbia MSM 60312 and Matsushita's MN1564XJ. The rest of the circuitry is fairly standard CMOS, with three 8253's in addition to 4013, 4011 and 4071's being in evidence.

On the rear panel there are sockets for a sustain on/off footswitch and an Expression pedal, an 8Ω Headphone connected after the master volume control, and an Auxiliary Out which is independent of that control. Also there's an Auxiliary In, which should be useful for accompanying taped music or even connecting a microphone, and a screwdriver-adjustable tuning preset giving plus or minus a semitone centred around A = 440Hz. There's also a battery power option. 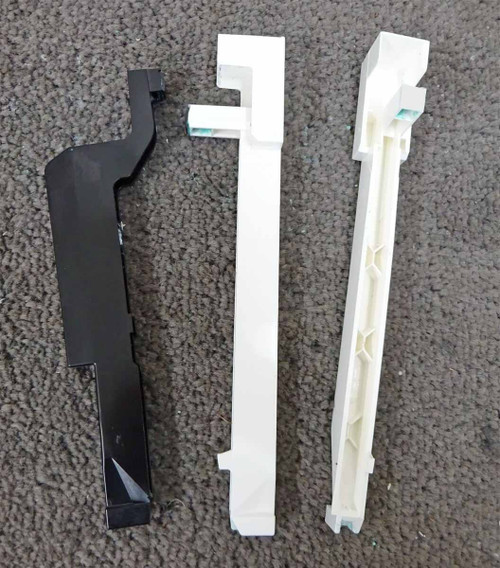 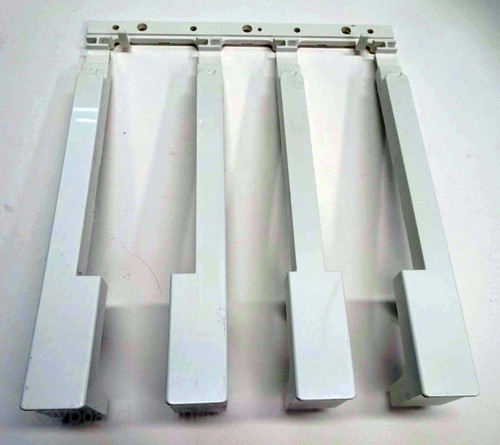 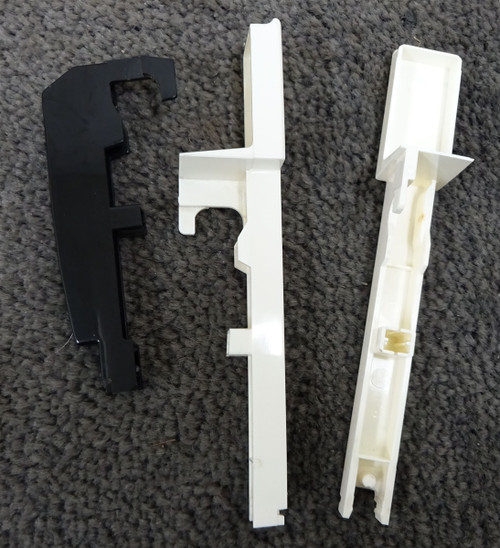